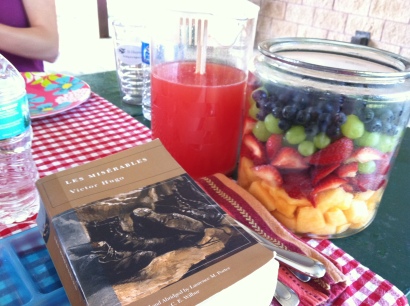 Our June book club meeting took us back to Geist Park, where our book club began several years ago, for a picnic and our discussion of Les Misérables. After I had posted a few pictures from our June meeting to Facebook, one of my co-workers told me he would join our book club, but he was solely interested in the food. I can’t say that I blame him. The food was delicious. 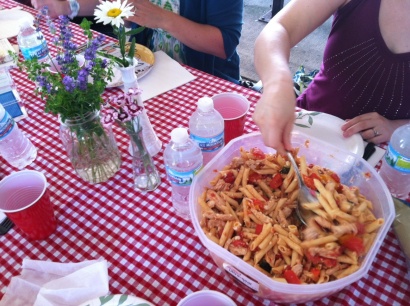 The décor was perfect for a summer picnic…

And Sarah’s mason jar cheesecakes were a huge hit…

Quite a few of us attempted Les Misérables, some of us watched a film adaptation instead, and a few of us finished. One thing we realized is that all abridgements (and film adaptations, for that matter) are not created equal. The Barnes & Noble classic edition abridged by Laurence M. Porter that a couple of us had seemed to be the best at cutting out some of the lengthy passages that didn’t really contribute to the story (including about 15 chapters about the Battle of Waterloo). However, a couple of us had abridged editions that cut out so much, the story didn’t really make sense anymore. We spent a lot of the time filling in the gaps and recounting the story, talking about the characters of Jean Valjean, Fantine, Marius and Cosette as we went along. I think we all are looking forward to seeing how the new film adaptation of the musical that will be coming out in December will treat the story and how it will compare to the novel. 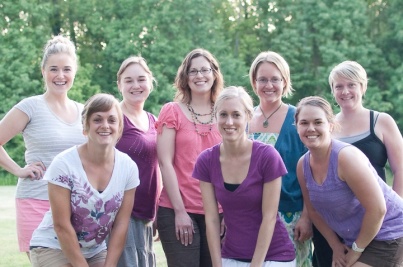 For July, we’re taking it a little easier and will be reading the (much shorter) essays “Nature” by Ralph Waldo Emerson and “Walking” by Henry David Thoreau. Hopefully the summer weather and warm sunshine will give you some inspiration to read these classics by two of the most famous naturalist authors. We will see you July 12 at 7 p.m. We will keep you posted on the location for this month, so watch for that information coming soon.

Born November 8, 1900 in Atlanta Georgia, she grew up hearing stories of the Civil War which laid the ground work for this masterpiece early on in her life.

In 1922 she took the next step leading to her literary fame when she began writing for the Atlanta Journal, a very uncommon career for a female in that time. In her short time a the paper (’22-’26) she became their leading feature writer.

Believing a husband should support the wife she quit in 1926 to return home and to her fiction when her husband was financially able to support them. Her fiction was the manuscript that would introduce us to Scarlett and Rhett and the war from the Southern point of view. She worked on her novel for roughly 10 years.

A very rough draft was first read by an editor at Macmillian Publishing, Harold Lantham, void of a first chapter, but he new the gem it would become. She, on the other hand, was reluctant to think it would amount to anything, but Lantham promptly sent her a check to encourage her to finish.

Mark your calendars and join us at 7:00 Thursday July 28th at Geist Park for a picnic and discussion of this epic novel! Bring a salad to share, your own dishes and your lovely selves!

If the past has anything to teach me, the summer goes fast… so I’ll see you all in a few short weeks!!