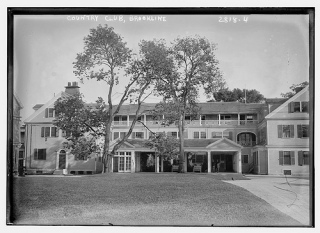 For one summer during college I worked at a country club in one of the ritziest suburbs of Columbus, Ohio. I worked in the “play room” where I essentially babysat the country club members’ kids while they ate lunch, went to the pool, or attended a workout class. I didn’t mind watching the kids (most days), but I definitely felt like a second-class citizen working there. We could only enter through the laundry room door (never the front), we had to stay as out-of-the-way as possible and cut through the locker rooms to get to other places in the building instead of walking through the halls, and on really busy days at the club like the Fourth of July, we had to park out in a field and walk about a half a mile to the building so the members and their guests could use the staff parking spots. We were expected to try really hard to address all of the members by name, but I had people whose kids I watched very regularly who would introduce their kids to me every time they were dropped off, which showed they didn’t even notice the same person was watching their children over and over again. Later, when I would tell people of my experiences working there, I would jokingly refer to the myself and my fellow staff members as “the help,” since it seemed like that was how the members viewed us.

Although I had that summer feeling like “the help,” my experience pales in comparison to the characters in our January book, The Help by Kathryn Stockett. Set in Mississippi during the 1960s, the book focuses on the relationships of several African-American maids and their white employers. For the maids, their employment is more than just a summer college job—they have few options to do much else. They also have to deal with a culture where racism is deeply embedded, which affects how they are treated in their work. The book tells of what happens when the daughter of one of the prominent white families in the town begins to realize how differently her friends’ maids are treated from the ways white people are treated.

So what about you? Have you had an experience that helped you identify on some level with the characters in The Help? If you’ve finished the book already, what do you think? If you haven’t gotten the book yet, there’s still some time to put it on your Christmas list. We hope you can come join us on January 12 at 7 p.m. at Paradise Bakery and Café at Hamilton Town Center. Don’t forget that it’s also “Bring a Friend Month.” This is the perfect book to get someone plugged into the Book Club. We can’t wait to see you all there.

One thought on “Introducing… The Help”